“The importance of Cézanne comes from the fact that he was the only person to profoundly break with this vision (the classic vision). And it is because of him that today (in 1953), the whole vision of reality is being questioned.” Alberto Giacometti

“Winemaking follows fairly strict rules that are well known to winegrowers. However, adhering to proven laws should never result in losing sight of potential actions that could affect traditional practices and enable them to involve. At this stage, like every other, we monitor our work and its effects on a daily basis, with a level of receptiveness to anything that could create something new.

The beautiful grapes that are harvested are placed in vats. They begin to release their juices purely under the action of their own weight. The environment is created for fermentation, which promptly begins. This is a secret, invisible and magical moment, as well as a chemical phenomenon that is an entirely unmysterious occurrence. I am aware that there is an explanation for every step, but I also know that it is not something we ‘understand’ in the deepest sense of the word. The rhythm of fermentation, the biological releases or forms of resistance we see here and there, and the way that the environment is transformed all vary from one vat to the next, one vintage to the next. It is evident that all of this is a living entity and should remain so. A vat is not a training centre, but rather a refuge for growth.

Fermentation is the transformation of sugar into alcohol by the action of yeast. From a chemical perspective, this is known as decarboxylation – in other words, carbon dioxide is released. This gas is lighter than the other substances so rises and escapes out of the top of the vat, bringing all the solid elements to the surface with it. This means that after 24 to 48 hours of fermentation, we have an initially obvious mixture that is split into two separate parts, namely the juice and the marc cap, which is made up of skins and pips held in suspension by the pressure of the carbon dioxide constantly forming in the juice. When I take novices to visit the vat house, I am moved by their marvelling at the ruby colour and bubbling energy of the marc when I open the vat lid. We disrupt the process for a brief instant, and I know that this also activates other, more intimate processes. The power of the fruit has a jubilant effect, and we can seek out all the aromas we can find before closing the vat again to leave it to its own devices. Aside from these particular contexts, visiting the vat is a necessary step from the very first day it is filled. But sometimes, my visits are like those of an impatient child standing in front of an oven baking a cake.

I sometimes hear people saying that the coloured juice comes from the grape pulp. Food colourings and other highly pigmented fruits can lead us astray, as grape pulp alone will only produce a transparent juice. The colour is in the skins, a nod to humanity which I love. This is also where the tannins are found. Together with the pips, they endow the wine with structure. The aim of the winemaking process is to extract colour and tannins (phenolic compounds) but also to transform this tannic material and soften its astringent, aggressive tendencies on the palate in favour of rounder, silkier sensations. This is the whole point of the winemaking process. The environment undergoes condensation-polymerisation phenomena, in other words a simple molecule is connected up into a molecular chain. Tannins and anthocyanins link up with other wine compounds, in particular polysaccharides, to form larger molecules, for a really pleasing feel.

However, depending on the year, it is sometimes necessary to select the extraction type and level based on the grapes collected and the desired result. The skins, grapes and seeds do not always have the same levels of ripeness. The grape may have been affected by rot, meaning ripe skins but pips that are still green. All of this is down to the weather. In the case just mentioned, we prioritise skin extraction over pip extraction. On the other hand, if everything is ripe, we can create a slightly richer wine by drawing out the tannins from the pips. However, it is important that only elegant, properly ripe tannins are extract. The art of winemaking can be summed up as ensuring measured extraction. Knowing when to stop can make a considerable difference when it comes to elegance. This measured approach is an attempt to establish harmony with nature. It does not like continuing the excesses that it produces in transitory form when the vast cycle of processes is restarted. At this point, like many stages in winemaking, we are halfway between control and dependence. It is a place of truth and humility, of ‘learned trial and error’ to freshen up ideas. I have often had the opportunity to watch artists during the creative process. They possess both technical expertise and an extraordinary psychological clarity regarding what they are working with. They are also free of all predefined truth, standing ready to receive what will shape the material into its ‘universal form’. Even if you know what you are doing, I feel that it is important to keep the resounding curiosity of those who assess their ignorance and are constantly seeking more. 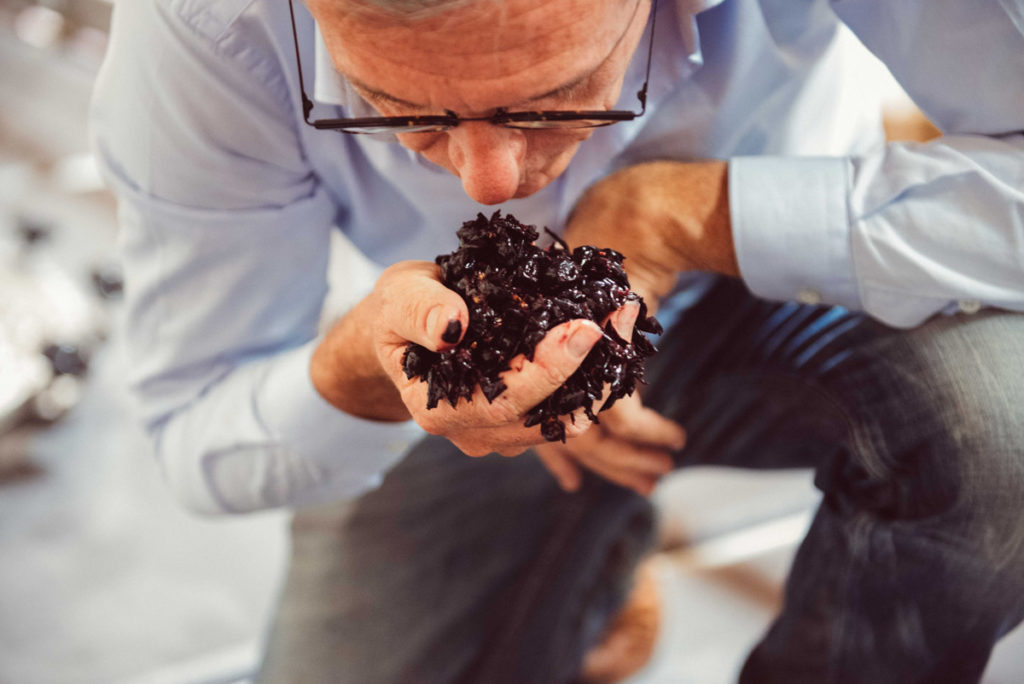 WHAT CHOICES DOES THE WINEMAKER MAKE FROM THIS POINT?

WHAT ELEMENTS CAN BE RELATIVELY CONTROLLED?

There are three ways to affect this stage in the winemaking process.

Combining these three allows us to produce a landscape of actions that bring us as close as possible to my intentions.

These are the first three areas where a winemaker can act. It is a lot yet also not very much. Hugely varying results can be achieved depending on these choices, but throughout the processes, there is a feeling of being confronted with a chaotic, complex, undoubtedly alchemical phenomenon totally beyond your control.

These last two elements are also part of the equation.

As a form of agriculture, winegrowing of course follows the laws of rainfall and good weather, but winemaking is primarily about time elapsing. There is constant vigilance of its effects, which I am firmly convinced can only be a good thing. It is exhilarating to be physically involved in growth, observing minute or very sensitive changes and the rhythm of hesitations and decisions so as to ‘jump in’ at the right moment. Alongside blending, it is the most thrilling part of my work.

Grape juice is a simple, pleasant drink whose quality is essentially governed by the ripeness of the grapes. Wine, on the other hand, can offer huge aromatic complexity and has particularly powerful evocative potential. It is an expression of its terroir of origin. The material develops a language, with earth, water and the passing of the seasons all present factors. Everything is recorded. The drink tells its own story and any interference should be cleansed from this narration. Giving wine a set language sterilises its message and reduces its scope. This is undoubtedly where biodynamics has the greatest impact. It is an extraordinary ally in the task of revealing, supporting and preserving the best of what the terroir has to offer. It acts on at least two levels.